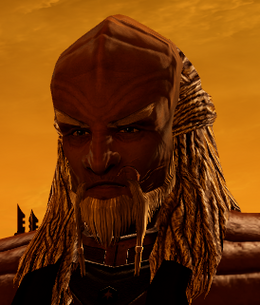 "Do you believe the Klingons call him an ambassador? The only diplomacy B'vat's ever used has been the business end of a disruptor."

B'vat, son of Warat, is a Klingon Admiral and a recurring adversary throughout the Klingon War mission-chain.

B'vat is the sole remaining descendant of Klingons who, in the 22nd Century, received knowledge of the future from a faction of the Temporal Cold War, the Na'kuhl. By 2265 B'vat was leader of his house and commanded the I.K.V. Quv. The House of B'vat was in the middle of a feud with the House of Duras following the death of B'vat's brother due to "Duras' treachery". He swore to avenge his brother with "the destruction of a hundred Duras ships".

After attaining the position of Ambassador, B'vat volunteered to mediate negotiations between Chancellor Martok and the Gorn Hegemony, leading to war between the Klingon Empire and the Gorn, which both B'vat and Gorn King Slathis considered a desirable outcome. In 2393, six years after the destruction of Romulus, J'mpok emerged as Chancellor of the High Council and was accused by Drex, son of Martok, of dishonorably killing his father. B'vat, the Arbiter of Succession, rejected his claim to the Chancellorship.

By 2409, B'vat had become convinced that the only thing keeping the Klingon Empire together was the conflict with the Federation, which broke out five years earlier. He thus sought any available means to prolong the war indefinitely.