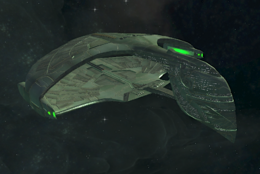 The D'deridex-Schlachtkreuzer is a large battleship used by the various Romulan and Reman factions. It is well-armed and has many capabilities ranging from tractor beams, subsystem targeting to sensor jamming. They usually travel alone, but are sometimes accompanied by either Mogai or T'varo Warbirds. Like other battleships, the D'deridex is heavily armed and well-shielded but lacks in maneuverability and speed.

At higher levels, the D'deridex is formidable even for a battleship. Often they will snare enemy vessels with their tractor beam and immediately follow with a trio of Heavy Plasma Torpedoes that can destroy even the toughest ships in a matter of seconds. This tactic has made the D'deridex Battleship infamous among the Star Trek Online community.

They are not invincible, however. One way to evade the aforementioned attack is to stay out of range of their tractor beam (5 kilometers). If you do get caught in the beam, you can get away by polarizing your hull, employing Jam Sensors or Attack Pattern Omega, or hitting the D'deridex with a Photonic Shockwave. You can also neutralize incoming Heavy Torpedoes with Cannon: Scatter Volley, Beam Array: Fire at Will, Torpedo: Spread, and (if the torpedoes are coming from behind you) Eject Warp Plasma, among others. Should one or more of these torpedoes impact your ship, using Hazard Emitters will promptly extinguish the resulting plasma fires and begin healing at least some of the damage dealt by the attack.