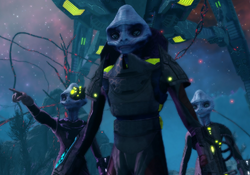 The Elachi are a mysterious race who operate out of bases hidden in subspace. They serve the Iconians as a warrior caste and are very rarely seen, preferring to use automated probes and drones against their enemies rather than send in living Elachi.

Elachi are fungal-based humanoids with mushroom-shaped heads and eyes mounted on short stalks. Their skin is grayish, and their limbs long and thin. The atmosphere most suited for Elachi is hazardous to most other humanoid races, but can be breathed if the humanoid wears a rebreather.

Their reproductive process involves infecting a "normal" humanoid with fungal spores that gradually consume the host body and coalesce into a newborn Elachi. The process effectively kills the previous owner of the body and creates a new mind.

The Elachi homeworld is located in the Mycelial network. For a long time, the Elachi remained in the network, living in a peaceful coexistence with other native inhabitants - the jahSepp and Tardigrades. At an unknown point in time, the Elachi were approached by the Iconians and recruited into their war with the powers of the "void space". (“Unter der Haut”)

Most, if not all, of the Elachi left the network to serve the Iconians. It remains unknown how exactly the Iconians persuaded them into joining them. While the Heralds served as their personal bodyguards and the Solanae as scientists, the Iconians tasked the Elachi with building an army. Elachi began attacking ships and planets throughout the Alpha and Beta Quadrants, kidnapping their crews and citizens, and converting them into more Elachi.

They were first encountered by the Earth starship Enterprise in September 2151, when an Elachi ship hounded them for several days before being driven off.

Amongst the Romulans, there were stories of miners that operated past the Eridan Belt who discovered alien beacons of unknown origins. Furthermore, they encountered alien beings that moved past their outposts magnetic barriers and scan the miners before disappearing. However, little was known of these mysterious aliens except that the beacons left behind referred to them as the Elachi. Despite a Romulan presence on such worlds, the creators of the beacons never appeared and the encounters with the creatures were dismissed as paranoia.

Conspiring with the Tal Shiar & the Iconian War[]

Colonel Hakeev of the Tal Shiar forged an alliance with the Elachi to further his plans following the destruction of Romulus in 2387.

In January 2409 the Elachi began to systematically attack independent Romulan colony worlds including Virinat, Crateris, and Delta Corvi. The colonies themselves were destroyed, and the inhabitants abducted for then-unknown reasons. The attacks were assisted by the Tal Shiar, including Hakeev who personally oversaw the destruction of Virinat aboard his flagship, I.R.W. Khnial. (“Invasion von Virinat”, “Wege trennen sich bei Crateris”, “Nacht und Nebel”)

The Elachi also assisted the Tal Shiar in their efforts to thwart the fledgling Romulan Republic, concealing warbirds in the Khitomer System and helping Hakeev develop new indoctrination methods to boost "recruitment" at bases such as Installation 18. They also attacked Republic bases such as Rh'Ihho Station and the Tephrei System. (“Wendepunkt”, “Installation 18”, “Abducted”, “Letzte Anstrengungen”)

Midway through the year, an RRF officer posing as a Tal Shiar agent learned from Taris that the Elachi were a servitor race of the Iconians, an ancient race planning to invade the Milky Way after hiding in the Andromeda Galaxy for 200,000 years. The Elachi served as the Iconians' proxies in Romulan space, working to undermine the Republic and prevent unified resistance when the invasion came. (“Enthüllung”, “Taris”)

Weeks later, a warbird crew managed to capture a S'golth Escort (nicknamed Target Alpha) and use it to infiltrate Station Alpha, the Elachi base of operations, in subspace. There they discovered the purpose of the abductions: the Elachi were using the captives as breeding stock to create more soldiers. The crew managed to destroy the station, and shortly after thwarted a vengeful assault on New Romulus with the help of a Republic/Starfleet/KDF fleet. The surviving Elachi retreated back into subspace, beaten for now. (“Wende”, “Zwickmühle”)

Following the accidental reactivation of the Iconian gateway network later that year, another Elachi invasion force emerged from subspace in the Jouret System to take control of a gateway located there. The Elachi were repulsed by another joint fleet. (“Einflusssphäre”)

In 2410, another Elachi base was located in subspace, this time accessed from the Delta Quadrant. An away team led by the crew of the R.R.W. Lleiset boarded the station and recovered a number of humanoid captives, as well as Empress Sela (who had been captured by the Iconians the previous year). The station was eventually taken by the Republic and held for study. (“Was übrig bleibt”)

When the Alliance officer, aided by Sela, discovered a Dyson sphere in the Andromeda Galaxy which the Iconians used as staging area for Elachi and Herald troops, the Iconians decided to accelerate their plans and begin their invasion. The Elachi participated in the invasion of New Romulus, continuing to harass and kill Romulan civilians even after the Herald attack was thwarted.

When the war ended, the Elachi disappeared. Some of them returned to their homeworld in the Mycelial Network.

When J'Ula of House Mo'Kai began opening mycelial rifts and corrupting the network several months later, most of the Elachi were corrupted as well, their neural functions deteriorating. In an attempt to stop the corruption, Elachi ships would leave the network and attack anyone in vicinity of the mycelial rifts, including the Alliance forces. Part of the Elachi started reverting into their original forms, but retained control over themselves. Some of them joined forces with the Alliance in the battle against J'Ula. (“Unter der Haut”)

Tarsev, a former Romulan, would later assist the Alliance again in closing a mycelial rift opened by J'Ula in the Terrh System. By that time, some of the Elachi have separated from the rest and are in command of a Free Elachi Vessel called the Liberator. (“Es gibt kein Zentrum mehr”)

The Elachi make use of fungal bio-technology with trace amount of spores present from their presence. They are capable of using powerful passive scanning technology that can disrupt enemy starship operations, and of hiding entire starships from detection through the use of spatial anomalies.

One distinctive piece of technology commonly used by the Elachi are insect-like automated drones. These come in a variety of types depending on their function: some are built for planetary combat, while others can grab humanoids during battle and carry them to an Elachi mothership hovering overhead. During surface attacks they often deploy massive walkers to destroy enemy defenses.

Their starships' shields have a distinctive green hue.

The Elachi seem to share some tactics and abilities with the Solanae, such as the way they transport people from normal space into subspace and the experiments they conduct on people. This is due to both races being servitor races of the Iconians.