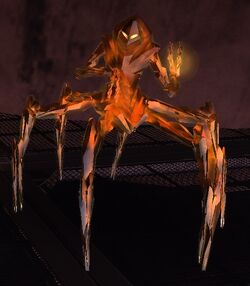 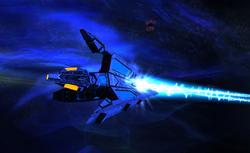 Tholians employ vessels of a characteristic conical shape able to "spin" energy webs around immobilized enemy vessels. Such Tholian Webs cause damage on contact and eventually contract, destroying any starships within.

Tholians predominantly use tetryon weaponry and are also known to create gateways to the Mirror Universe in order to receive assistance from their counterparts of that reality. Their deflector shields have a distinctive red hue.

It has been theorized that the Assembly actually spans multiple dimensions in spacetime. These claims are supported by their frequent involvement with the mirror universe, as well as their apparent interest in the Temporal Cold War, and time displaced artifacts. It is said that Tholia inhabits a region of space where the borders between dimensions are unnaturally thin, and that the Tholians have developed technology that allows them to cross those borders at will. In 2409, observation of the Assembly's activities on Nukara Prime and in the Azure Nebula lends strong credence to the theory.

Limited first contact with Humans took place in 2152 due to the Tholian's involvement in the Temporal Cold War. Over the 23rd and 24th centuries, the Tholian Assembly was embroiled in several small skirmishes with both Starfleet and the Klingon Empire. In 2373, the Assembly signed a non-aggression pact with the Dominion, but continued to have ambassadors on Earth, Romulus and Deep Space 9 at least during the 2370s and 2380s.

In 2409 Tholians archaeologists were sighted searching Dewa III (later re-named New Romulus) for ancient Dewan and Iconian artifacts. One such team was attacked and killed by representatives of the Romulan Republic, who then claimed the planet(“Die Suche nach Neu-Romulus”). The Tholians would periodically attack the Romulan Star Empire's ships within the Azure Nebula, and were counter-attacked by Federation, Klingon, or Romulan Republic forces. (“Rettung im Azure-Nebel”). When Romulan encroachment on Dewa III threatened to result in the destruction or theft of valuable artifacts, the Tholians launched a diversionary attack, threatening to steal the Vault. (“The Vault: Ensnared”, Mission: Web Access). This feint was unsuccessful, and ultimately the remaining Tholian scientists were killed, and their research taken by the Romulan Republic (Mission: The Power Source). The Romulan misuse of this research then almost destroys the planet (Mission: Sphere of Influence).

Around this time the Tholians also began investigating naturally-occurring spatial rifts on Nukara Prime and in the Azure Nebula. They were able to capture a Terran Odyssey Dreadnought Cruiser from the mirror universe and held the vessel beneath a cavern on Nukara Prime until it was destroyed by a Starfleet/KDF/Romulan Republic strike team. (“Hot Lead”, “Netzzugriff”, Tholian Incursion)

When the second Crystalline Entity began wreaking havoc in the Beta Quadrant, the Tholians sent a fleet of ships to protect it from an attacking Starfleet task force. A second task force was sent, which succeeded in destroying the Entity and driving away the Tholians. It is unknown why they were protecting the entity. (“Crystalline Cataclysm”)

In 2410 the Tholians used a trilithium weapon to halt nuclear fusion in the Lukari System's sun in an attempt to lure Kal Dano to that time period. Although Dano managed to save the star, the Tholians attacked his timeship and managed to steal his quantum phase inhibitor (which they called the Tox Uthat). They then used the inhibitor to destroy the Na'kuhl System's sun, forcing its inhabitants to abandon their homeworld. Dano was able to recover the Tox Uthat and hide it on Risa in the 22nd Century, but a subsequent Tholian attack trapped him many centuries in the past where he ultimately perished. (“Sonnenaufgang”, “Vom Sturm erfasst”)

In 2769, the Tholian Assembly is among the signatories of the Temporal Accords, though the Tholian Ambassador attending states that the Assembly's position is that while they support the Accords, they believe that all time travel should be banned and will continue campaigning for such while taking whatever steps necessary to preserve the timelime should others fail to do so.

In an alternate timeline created by the disappearance of the U.S.S. Enterprise-C in 2344, the Tholians had signed a non-aggression pact with the Dominion following their victory in the Dominion War and by 2409 controlled much of the Beta Quadrant. This timeline was averted after the Enterprise crew managed to escape and return to their time with the help of the U.S.S. Pastak. (“Temporaler Botschafter”)

For a key and notes on each chart see here.