The U.S.S. Enterprise, one of the most famous Starfleet ships of the 23rd century

The 23rd Century is a span of 100 Earth years that started in 2201 and ended in 2300. The century is defined by several conflicts among the powers of the Alpha and Beta Quadrants of the Galaxy. Despite constant threats, the United Federation of Planets faces an unprecedented growth and advancement of science and society.

The 23rd century is the starting point for both the DSC Starfleet and TOS Starfleet factions, as well as the settings of several missions for other factions.

The U.S.S. Glenn in service during the Federation-Klingon War

Paradise City on Nimbus III is established in 2267

Natives of Taurus II attacking a crashed Federation starship in 2270

The Excelsior class is commissioned in 2285 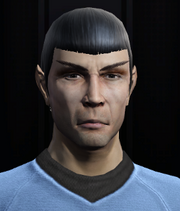 Spock was born (and reborn) in the 23rd century