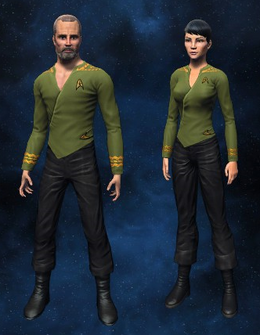 The 23rd Century Command Tunic is the wraparound tunic worn by James T. Kirk in a handful of episodes of Star Trek: The Original Series. It can be purchased from the Zen Store either individually for 550

The tunic contains a single piece for the upper body. This pieces can be used in Uniform and Off-Duty slots for male or female characters.