This article is about the playable starship. For the NPC vessel, see APU Battleship. 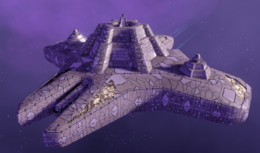 The APU Cruiser is a Tier 5 (Level 40) Cruiser which may be flown by characters of any faction.

Players can obtain this starship as a ultra rare drop from the [Infinity Lock Box]; it comes in an [Infinity Prize Pack - T5 Ship] choice package, which is bound to you until a ship is chosen. It can also drop from the older [Vaadwaur Lock Box]. The boxed ship is not bound and so may be traded to other players or bought and sold on the Exchange for energy credits under the name [Special Requisition Pack - APU Cruiser].

The vessels of the APU (which stands for "Automated Personnel Units") are robust and practical, and well-suited for warfare thanks to their longstanding conflicts with one another. The APU from the Pralor and Cravic factions have waged an unending war with one another for many years, thanks to their inflexible interpretation of the core programming that drives them. Despite being artificial lifeforms, the APU are entirely self-contained and do not integrate with any of their known technology. Their starships and equipment can therefore be easily adapted for use by other species.

By using an [Experimental Ship Upgrade Token], the APU Cruiser may be upgraded to T5-X, unlocking an extra ship device slot, universal console slot, and the ability to slot an extra starship trait.