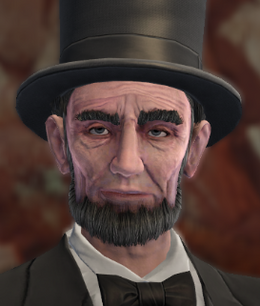 A simulacrum of Abraham Lincoln was created by the Excalbians in the 23rd century out of the mind of James T. Kirk. He was constructed as part of the first trial of good vs evil, alongside a simulacrum of Surak, to assist Kirk and Spock against the simulacrums of Kahless, Colonel Phillip Green, Zora and Genghis Khan.

Lincoln was killed during the trial, but his simulacrum was recreated as the Excalbians continued to debate good vs evil. During the second trial, in 2411, he assists the player in navigating the trials and dealing with Yarnek. He is shown as a moderating influence on the Excalbians, defending the player when their choices are criticized.