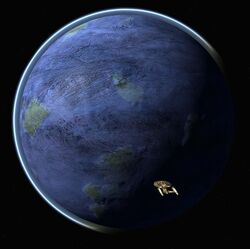 Acamar III is a non-aligned planet and homeworld of the Acamarians. It is located in the Azure Sector which gains strategic importance with the Romulan Republic's efforts to colonize New Romulus.

The Acamarians suffered from internal strife since before the invention of warp drive. The eventual settlement of the clan conflicts in the 23rd century drove a part of the population off-world, who became the Gatherers - space pirates.

In 2368, Captain Jean-Luc Picard and Sovereign Marouk made peace with these pirates and the Gatherers were welcomed back to Acamar III. ( “Acamar System Patrol”)