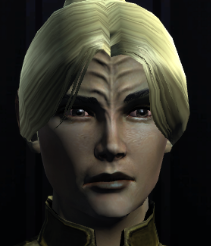 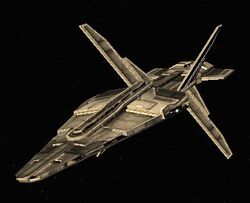 The Acamarians are a non-playable species native to Acamar III. They are notable for importance of clan structures and conflicts in their culture.

Their homeworld is located in the Azure Sector, the intersection of Federation, Klingon and Romulan space, which gains strategic importance with the Romulan Republic's colonization effort, supported by the Federation and the Klingon Empire.

The Acamarians are a humanoid species, similar to Humans or Bajorans. Unlike those, however, their forehead is covered by ridges mirroring the general shape of eyebrows. These cranial ridges are similar to those of the Klingons, though less pronounced.

Acamarian blood is iron and copper based, a rarity among species in the galaxy.

The Acamarians value their deeply rooted connection with their homeworld, Acamar III. In addition, their society is organized in a clan structure. Conflicts among the clans could last centuries. Since the 23rd century, efforts to achieve a lasting peace have been made and are slowing bearing fruit.

During the schism, the Gatheres lived as space pirates and operated from bases in the Hromi Cluster.

Even after the invention of warp drive, the Acamarians struggled with inter-clan blood feuds. A settlement was reached in the 23rd century. Those unhappy with the result left the planet and became space pirates known as the Gatherers.

In 2368, Captain Jean-Luc Picard of the U.S.S. Enterprise-D urged the Acamarian Sovereign and the Gatherer leader to finally settle their dispute. The Gatherers ceased their raider lifestyle and were welcomed back to Acamar III.

However, land on the planet is scarce and the Acamarian Ruling Council redistributed it and pushed some clans to the resource-rich outer worlds. In 2409, tensions between the clans are boiling again.

Acamar III has a unified global government known as the Acamarian Ruling Council, also known as assembly. The assembly consists of clans of varying power and influence. The leader of the Acamarians is the Sovereign. In 2368, Sovereign Marouk helped returning the Gatherers to their ancient home.

In the 25th century, the Acamarians possess three types of starships: frigates, cruisers and battleships. They have a generic design and are equipped with Phaser Beam Arrays and Photon Torpedo Launchers.

Acamarian duty officers are available for the Romulan Republic and can be found in the Romulan Survivor Duty Officer Pack.