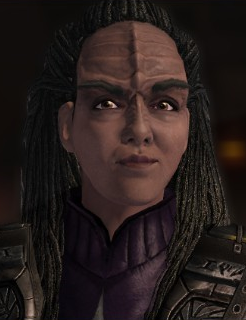 Adet'pa (previously known by many names including "Agent Qlb", and "The Witch of Nimbus III") is a Klingon officer serving as First Officer and later Captain of the I.K.S. Kor under General Kurn. Following the Hur'q attack on Bajor, she accompanies Martok and Kurn to Deep Space 9. She is later revealed to have been hiding as a member of House Mo'Kai under J'Ula. Assuming a mysterious identity, she serves as a guide to Klingon players during the Klingon Recruitment Event.