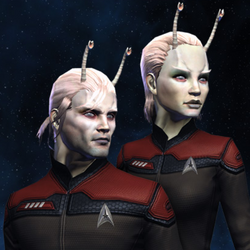 An Aenar Male and Female.

Aenar (plural: Aenar) are a humanoid race native to the frozen moon of Andoria. They are a sub-species of the Andorians and members of the United Federation of Planets.

The Aenar are distinguished from Andorians by their pale white skin and congenital blindness. Their finely-tuned telepathic abilities and sensitive antennae allow them to "see", however. Like Andorians, the Aenar have a pair of antennae on top of their heads but their forehead is smoother in comparison.

The generally pacifistic Aenar live in secluded enclave in the Northern Wastes on Andoria. Encouraged by the Federation's open society some of them have chosen to join Starfleet.