The logo of Agents of Yesterday

Agents of Yesterday, launched 6 July 2016, is the third expansion for Star Trek Online, focused on the 23rd century.

Agents of Yesterday is set during the TOS-era of Star Trek, shortly after the on-screen adventures of the U.S.S. Enterprise 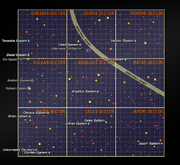 A new faction, featuring Starfleet characters and stories set during the 23rd century, beginning in 2270.[1] Similar to the Romulan Republic, TOS characters will join the other factions for shared endgame content, following the Agents of Yesterday tutorial arc.[2] 23rd century missions will take place in a separated instance of sector space[2], and feature a 23rd century version of Earth Spacedock as a faction hub. Playable characters available to TOS faction are Andorian, Human, Tellarite and Vulcan.

Classic locations, such as Taurus II, will be revisited

Agents of Yesterday will be set shortly after the timeline of the The Original Series, featuring locations, characters and starships from that time period.

Missions unique to the TOS faction include the Agents of Yesterday story arc:

A new Reputation for all factions.[1] The reputation includes two new space queues, “Days of Doom” and “The Battle of Procyon V”, and one new ground queue, “Miner Instabilities”. Temporal Marks will also be available from the Badlands Battlezone.[14]

An event, similar to the Delta Recruitment, in which new TOS characters will be able to earn special rewards. All characters created during the first six weeks following the expansion's launch are eligible to participate in the Temporal Agent Recruitment event.[15]

Pavel Chekov, voiced by Walter Koenig, is one of the expansion's central characters

Other characters from The Original Series appear without voice-acting and some have dialogue snippets from the Original Series, including Enterprise crew members Nyota Uhura, Hikaru Sulu, Mears, Leslie, Palmer and Hadley, as well as diplomats Sarek and Gav. James T. Kirk appears briefly in “Return to Babel”, albeit without dialog.

Joseph Gatt portrays 0718, an augmented science officer from the U.S.S. Enterprise of the Kelvin Timeline, as depicted in Star Trek Into Darkness.[16] Lieutenant 0718 appears alongside other elements from that universe, including the re-imagined Constitution class and the Klingon D4 class. This is the first appearance of elements from the rebooted Star Trek movies in-game since the Red Matter Capacitor, which was available as a bonus item for special release editions of Star Trek Online in 2009.

The Ranger class, one of several TOS-era vessels

The Paladin class, one of several futuristic T6 variants that can wear the costume of it's TOS-era counterpart if the player owns both ships, in this case the Ranger class pictured above

Agents of Yesterday features many new vessels, including Temporal vessels and era-appropriate, 23rd century ships.[1] The original Constitution class model has been rebuilt from scratch to fit the original studio model more closely.[17]

Several TOS-era vessels will receive T6 counterparts, which will be able to use the TOS-era skin.[18] Three new T6 vessels are available for Klingon and Romulan players[19], while the majority are available to Federation and TOS characters only.

Agents of Yesterday: Artifacts was a mid-expansion update, released on October 25, 2016. It featured a new episode, “Echoes of Light”, introducing the New Frontiers, a story arc involving the Lukari.

Update included a new fleet holding (Fleet Station K-13), a revamp of the Kit system and updated lighting and graphics, as well as an introduction of a Sphere Builder Lock Box. In addition, New Romulus ground missions (including the New Romulus Reputation System missions) and Kobali Prime Adventure Zone missions were added to the mission journal.

From October 27th to 29th, 2016, players could claim three free items from the Zen Store, once per account:

Agents of Yesterday was released on July 6, 2016. Similar to previous expansions, item packs are available for purchase, which contain several Zen Store ships, uniforms and other perks like titles and upgrade kits.[22]

Beta Testing for the expansion began in early May, with test builds being released on the Tribble test server. Since then, several updates have been released and new missions and systems were gradually released for testing.