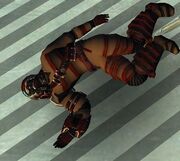 Ak'ched is a rank found in the Breen military's ground forces, roughly equivalent to a Lieutenant. They are distinguished by their bulky, armored refrigeration suits and cyan visors, as well as a tall metal crest on their helmets. There are two types of Ak'ched: Soldiers and Guards.

Ak'ched Guards, like their Soldier counterparts, can throw a Cryonic Grenade, which lays down a lingering ice fog in its blast radius which will slow, and sometimes freeze those unfortunate enough to be caught within the fog. Unlike their counterparts however, Ak'ched Guards prefer melee combat, and wield a Neural Truncheon, a baton-like weapon that can, and usually will, stun a target when it hits. Their preferred method of attack is to run quickly towards enemies in order to close to within range of their Truncheon weapons.