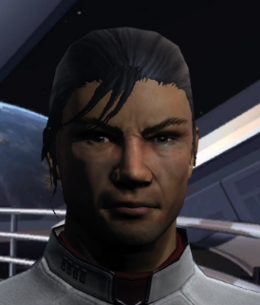 In his time he has served on the U.S.S. Lexington and the U.S.S. Archer. He was second in command of Earth Spacedock until he was promoted to assume command of the U.S.S. Poseidon. He was replaced by Commander Samuel Winters but returned to resume his old post in 2409. As of 2410, Captain Sulu is the Commanding Officer of Earth Spacedock, handling the station's day-to-day business, while Admiral Quinn is its Commander-in-Chief. [1]

Before his promotion, one of the first missions you had to complete after the tutorial was reporting to Akira Sulu. Many new players had difficulty finding him, giving rise to the popular "Where's Sulu?" question in the chat box. He originally occupied the spot in the Admiral's Office where Commander Samuel Winters now stands.

The personnel in the Spacedock still remember this and enjoy confusing new officers by discussions of where one might find Sulu.

During the 1 year anniversary event, it was revealed that Q was looking for Sulu, probably a reference to this question.

Since the 2 year anniversary event, you can ask Q where Sulu is. He will say the joke is getting old. Sulu can again be found in the Admiral's Office.

With the revamp of Earth Spacedock in Season 9: A New Accord, Sulu started asking players who approach him if they were looking for him, referencing this meme.