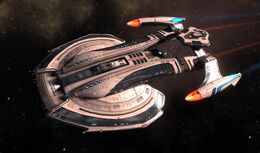 The Alita-class Heavy Strike Wing Escort is a Tier 6 Strike Wing Escort which may be flown by Starfleet characters, including Federation-aligned Romulan Republic and Dominion characters. All faction restrictions of this starship can be removed by having a level 65 KDF character or by purchasing the Cross Faction Flying unlock from the Zen Store. This starship can be used from any level upon completion of the tutorial experience. As you level up, this ship gains additional hull, weapon slots, and console slots.

. It is also available as part of the following: Akira Bundle for 6,000

The Tier 6 Alita-class Heavy Strike Wing Escort is based upon the highly successful Armitage-class design. This new heavy escort has been built from the ground up to most efficiently combat the Iconian threat.

This vessel unlocks the Alita-class costume. It can utilize the Pilot bridge officer powers and other abilities described below.

This ship comes equipped with the [Console - Universal - Destabilized Tachyon Emitters], which is part of the Heavy Escort Modifications Set.

The remaining consoles in the set are included on the Tier 3 Thunderchild-class Heavy Escort Refit and Tier 5 Armitage-class Heavy Strike Wing Escort, respectively.

The Alita-class Heavy Strike Wing Escort comes with an Experimental Weapon slot. This additional slot does not fit standard weapons. Unlike standard starship weapons, Experimental weapons are not affected by weapon firing modes, such as those granted by bridge officer abilities.

The Advanced variant of the Peregrine Fighters can be obtained from the Dilithium Store, while the Elite variant is obtainable from the Fleet Starbase with unlocked Tier V Communications Array.

By using an [Experimental Ship Upgrade Token], the Alita-class Heavy Strike Wing Escort may be upgraded to T6-X, unlocking an extra ship device slot, universal console slot, and the ability to slot an extra starship trait.

The following table compares various T6 Strike Wing Escorts that may be flown by Starfleet captains.