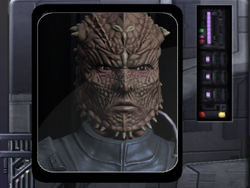 The Alpha Jem'Hadar are those Jem'Hadar created by the Dominion in the Alpha Quadrant after 2374. They were bred to be more independent and considered themselves superior to their Gamma Quadrant counterparts. As the Dominion retreated after the Dominion War in late 2375, they were left behind.

Although they still consider the Founders 'gods', they are not affiliated with the actual Dominion in the Gamma Quadrant anymore. Instead they follow Laas and his New Link based on Orias III, and thereby also indirectly the True Way.

In 2386, Odo asked First Lamat'Ukan of the Alpha Jem'Hadar on behalf of the Founders to return to the Gamma Quadrant. The First rejected the offer, despising Odo's sympathies for the solids and regarding him as a false god.

In 2387, Lamat'Ukan has his people take possession of the unpopulated world Devos II, establishing a base of operations and Ketracel-White production facility. Starfleet considers them to be contained and not a further threat.

Gul Madred contacts Lamat'Ukan in 2393, who agrees to send troops to protect the Gul's mines in the Septimus System to protect them from raiders. This begins the alliance between the Alpha Jem'Hadar and the True Way.

In 2398, Starfleet Intelligence finds out that Laas has arrived with two other Changelings in the Devos System. He is the first to create a new link with them and, as the most experienced, takes leadership. In order to protect his "new Link" and together with First Lamat'Ukan and Gul Madred, Laas tries to form a "new Dominion".