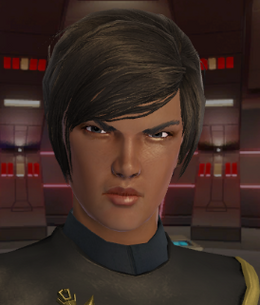 This article is about mirror universe counterpart of Amna Patel. For other uses, see Amna Patel (disambiguation).

Amna Patel served as the security chief aboard the I.S.S. Discovery when she was transported to 2410. Patel later takes command of the Discovery when and leads it back to the 23rd century where it will be found destroyed.