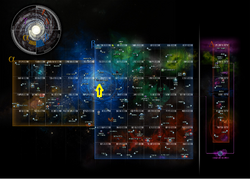 The Andoria System is a system located in the Vulcan Sector of the Beta Quadrant.

It contains the planet Andor and its moon, Andoria, which is the homeworld of the Andorians and Aenar as well as a founding member of the United Federation of Planets.

A moon with an oxygen-nitrogen atmosphere orbiting a ringed gas giant, Andoria is one of the founding worlds of the Federation and home to almost one billion inhabitants. Most Andorian settlements are underground and connected by thousands of kilometers of tunnels. However, a portion of the Northern Wastes has been set aside as a public area for visitors to the planet to enjoy its frozen beauty.