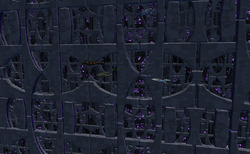 The Andromeda Dyson Sphere is a Dyson sphere, previously located in the Andromeda Galaxy and inhabited by the Iconians and their Herald servants.