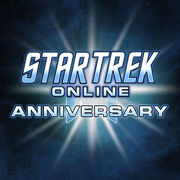 The Anniversary Event is an annual in-game calendar event which celebrates the anniversary of the launch of Star Trek Online in February 2010. Q appears at Earth Space Dock, First City, and New Romulus Command and presents a variety of events for players to participate in. The event typically consists of at least 1 new featured episode, side events and a grand prize of a Tier 6 playable starship. The event sometimes accompanies a game update.

Years 2 and 3 rewarded a starship following the first playthrough of the Anniversary episode. From year 4, [Anniversary Qmendation]s were introduced. Events, including playing the episode, rewarded these vouchers. The player had to submit 1000 vouchers into the (now defunct) events tab in the Reputation System to collect the grand prize.

In order to encourage activity each year, from Year 6 these were replaced by [Anniversary Prize Vouchers] linked to the relevant year.

instead. This allowed for more activities to reward progress towards the ship.

The mission “Party Patrol” (also “Party Crashers” and “Present Patrol”) was a daily mission at Starfleet Academy and the Klingon Academy. Rewards, depending on the year, included;

From the introduction of Omega Stablization, it's main rewards were transferred to the Omega minigame. It last appeared in 2019.

Omega Stabilization, played daily through “Omega Molecule Stabilization”, was introduced in Year 5 and rewarded materials that could be used to create Omega Particle Tech Upgrades. It also took over Party Patrol rewards including;

From the 4th year event, various items have been given away via the Zen Store in the days leading up to the start of the Anniversary Event.

The key giveaway was extended into Feburary 27th for Xbox players due to an Xbox Live service outage on the 25th.