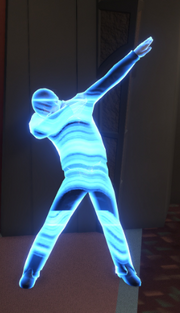 A holographic representation of James Kurland dabs outside Quark's Bar on April 1st.

April Fools' Day is an real-life Event which occurs on April 1st. It typically involves jokes and antics regarding various aspects of Star Trek Online. Historically it has not (or may not have) been observed every year, and said jokes may vary from year to year.

Added on April 1st, 2017, Artisanal Sound is joke feature that replaces most sounds with mouth noises. These sounds were recorded by many developers working on Star Trek Online at the time. They can be toggled on and off via the Options menu or via the Low Priority Interaction section of the in-game UI. This feature has returned every year since its addition, for one day only (April 1st to April 2nd).

Also released on this day was a set of joke Tribble (server) patch notes.

Added on April 1st, 2018, a holographic representation of Captain James Kurland was added to the Promenade of Deep Space 9, located just outside of Quark's Bar. Interacting with this NPC grants a "Dab" ground emote for all characters on the account. This NPC has returned every year since its addition, for one day only (April 1st to April 2nd).

For the 2018 run of this event, Klingon-aligned characters could target and kill the Federation-aligned Holo-Kurland NPC. This "feature" was removed for the subsequent visits of Holo-Kurland.

Popularized by a February 2019 Reddit post and reposted as an official blog by the developers. This "feature" can still be reproduced in-game.

Also released on this day was a fake announcement for a "Gorn of Discovery" expansion.

Starting on April 1st, 2020 at 9AM PT, all major NPCs around the game began playing the Accordion ground emote. Also during this event, a joke "mysterious box" could be claimed by the previously-added Holo-Kurland. This box opens into itself a random number of times before being removed from the player's inventory.

If used in space, it will cause the player's ship to explode in addition to its previous effects. If used on the ground, the character will "explode". This box can be reclaimed infinitely for the duration of April Fools' Day.

This feature has returned every year since its addition, for one day only (April 1st to April 2nd).