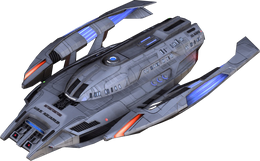 The Aquarius-class Light Escort is a Tier 5 (Level 50) Raider which may be flown by Starfleet characters, including Federation-aligned Romulan Republic and Dominion characters. All faction restrictions of this starship can be removed by having a level 65 KDF character or by purchasing the Cross Faction Flying unlock from the Zen Store.

, so long as the player's Fleet has a Tier IV Starbase Shipyard and one Starbase Military Fleet Ship Provision.

This is a playable version of the Aquarius Escort that comes with the Odyssey-class Tactical Cruiser. Unlike the non-player version, it does not come with [Phaser Quad Cannons] or the [Console - Universal - Point Defense System].

This ship and the Fleet variant can equip and operate the Cloaking device console that is included with the Galaxy-class Dreadnought Cruiser and Defiant-class Tactical Escort Retrofit.

The Aquarius-class Light Escort comes with an Experimental Weapon slot. This additional slot does not fit standard weapons. Unlike standard starship weapons, Experimental weapons are not affected by weapon firing modes, such as those granted by bridge officer abilities.