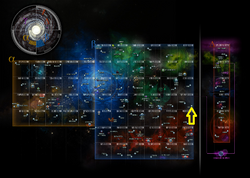 The Archer System is a system located in the Narendra Sector of the Beta Quadrant.

The Archer system is actually the second star system to have planets named for famed human explorer Jonathan Archer. The first, which is located in the 61 Ursae Majoris system, was the first M-class planet explored by the crew of the starship Enterprise in 2151. In 2222, a venture company seeking to attract more settlers to the system named it Archer and flooded newsnets with advertisements calling for "real explorers". Several hundred people answered the call, and a small, unaffiliated colony was founded on Archer IV.