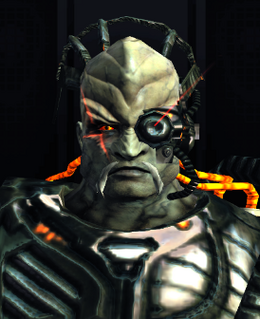 Armek of Borg is a powerful Elite Tactical Drone who used to be a Klingon. He is the boss of the Special Task Force mission “The Cure Applied”.

Armek is arguably the hardest ground boss in the game, armed with a plasma cannon that can take down most players in a shot or two. Players should avoid his ranged attack at all costs and engage him at close quarters with melee weapons.

Alternatively all team members can equip Sniper Rifles and chip away at his health from the weapon's maximum range, which is slightly outside of Armek's. In this approach, only 2 team members are needed to defeat Armek if they prevent him from selecting one or the other by either trading aggro with each other or constantly keeping a distance from Armek just barely inside the Rifle's maximum range. An excellent weapon for this is the TR-116B, which has both the longest sniper range in the game, a secondary which ignores shields, and is immune to adaptation.

When injured, Armek starts to generate Cover Shields and Force Field Domes, blocking the attackers line of sight and pushing them around. He can also call in Orbital Strikes, which are very powerful.

Armek's right arm has been replaced with a powerful cannon, able to take down most players with one or two volleys. He can also assimilate players if they get too close.