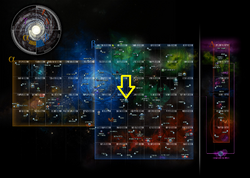 The Arucanis Arm comprises a long curve of star systems spinning off the edge of the border between the Alpha and Beta Quadrants. Much of this arm consists of stellar gasses, nebulae, and matter that formed into proto-stars, which gives it a brilliant color full display in the dark sky.

All duty officer assignments are present in Assignment chain: Colonization.