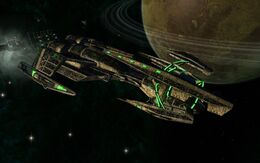 The Assimilated Carrier (official designation unknown; presumably part of the KDF seventh fleet) is a Borg-assimilated Vo'Quv Dreadnought and the final boss of “The Cure Found”.

Like any other Vo'quv, the assimilated carrier has very low maneuverability and launches waves of assimilated fighters. The carrier itself poses less of a threat than the craft it spawns, so players should focus on clearing these support craft quickly.