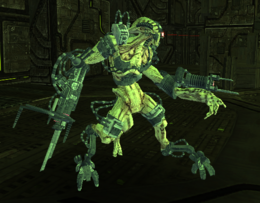 The Assimilated Undine is an Undine captured and assimilated by the Borg Collective.