In Star Trek Online, an away team is a group of a player captain and up to four other players or Bridge Officers. Most ground missions available in the PvE queue are designed for away teams of five players, while some adventure & battle zones allow you to take along only one or two bridge officers.

The "choose your away team"-screen

Usually, any away team slot can either be filled by a Bridge Officer or other players your character has teamed up with. The team leader can also specify how many slots are assigned to which player, i.e., how many Bridge Officers they can bring along. The composition of your away team can be determined on the "choose your away team"-screen, which appears whenever transitioning onto a ground map permitting an away team. It is also possible to specify a standard set of Bridge officers, which will then be automatically pre-selected on the away team-screen and is also displayed behind your avatar in the character selection menu before logging into the game. To change your default away team, press "U" to open your status. To the right of the status tab, there is another tab called "Stations". Open this tab, and you can select your default away team in the bottom left. 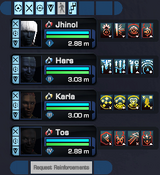 The away team-UI: While BOffs automatically use their abilities, the player can also manually click them at any point of time.

Subcommander), Bridge Officers have four abilities at their disposal. By default, bridge officers will use their abilities on their own. However, players may manually activate them at any time or choose to disable automatic use of an ability by right clicking it (red background).