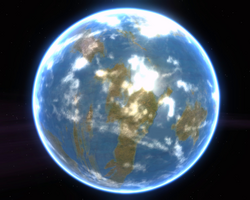 Panorama of the central square of Hathon

Bajor is the homeworld of the Bajorans and namesake for the Bajor Sector. The planet is notable for its location at the entrance of a stable wormhole, the Bajoran wormhole.

During the brief occupation of Deep Space 9 in 2409, the city of Hathon was made hub and social area for both Starfleet and the KDF.

All of these items are available elsewhere in Federation space, at a discount of 80%-90% off of Bajoran prices.