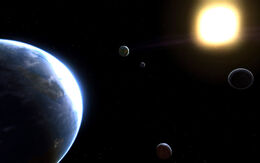 The Bajor System is a system located in the Bajor Sector of the Alpha Quadrant and home of the Bajorans.

The system also hosts an area of increased radiation called the Denorios Belt. Close to it, Starfleet starbase Deep Space 9 is positioned at the entrance of the Bajoran wormhole that leads to the Gamma Quadrant. Due to the wormhole, which is also home to an alien species called Prophets, the Bajor System has a high strategic importance.

The home system of the Bajoran people. The system has eight[1] planets, and there are four moons around Bajor, which is the homeworld.

The Bajorans are a deeply spiritual people, and faith in the Prophets drives much of who they are. They are also fighters, and when their world was occupied by the Cardassian Union they launched a fierce opposition movement that ultimately drove the Cardassians forces to retreat.

Bajor is one of the newest members of the United Federation of Planets.

Bajor has had space-flight technology for at least 850 years. There is evidence of at least one Bajoran vessel of that period, a solar-sail craft which entered the Denorios Belt and was unintentionally accelerated to warp speeds by the high-energy particles therein. This vessel then crashed on Cardassia (possibly being Cardassia's first contact with an alien sentinent species), a fact concealed by the Cardassian government for 800 years, until the voyage was recreated by a replica vessel commanded by Benjamin Sisko in the 2360s.

Bajor is one of the newest members of the United Federation of Planets, having joined after the Dominion War. After the Cardassian Occupation and through the Dominion War, Bajor was a small independent power under the protection of the Federation, and Deep Space Nine was staffed by a mixed crew of Starfleet and Bajoran Militia origins.