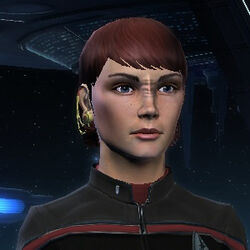 Bajorans are a humanoid species primarily residing on the world of Bajor which is located on the edge of Federation and Cardassian space. Bajorans are a playable race in Star Trek Online, and belong to the Federation faction.

Bajorans appear nearly identical to Humans except for several distinguishable horizontal creases across the bridge of their nose. There are, however, some internal differences.

Bajorans are very spiritual people. Their beliefs center around the Prophets (who reside in the Celestial Temple or Bajoran Wormhole, and are therefore sometimes referred to as Wormhole Aliens by non-Bajorans) and their adversaries, the Pah-wraith (outcast Prophets, now resident in the Fire Caves). Some Bajoran shrines and monasteries are in possession of Orbs, which are artifacts of great power created by the Prophets; coming into physical contact with an Orb often triggers visions, even among non-Bajorans.

Bajorans typically wear an earring on their right ear as a symbol of their beliefs. This earring also carries the symbol of their family name and their D'jarra. D'jarras were a vital part of their social hierarchy before the Cardassian occupation of Bajor. This practice was abandoned once the Bajorans sought acceptance into the Federation after regaining their independence from the Cardassians.

Bajorans have had space-flight technology for at least 850 years. There is evidence of at least one Bajoran vessel of that time; a solar-sail craft which was accidentally accelerated to warp speed and crashed on Cardassia. This incident was covered up by the Cardassian government until it was recreated by a replica vessel under the command of Benjamin Sisko 800 years later, in the 2360s.

It is known that Bajorans are biologically compatible with Cardassians, and there are medical records of a Bajoran woman serving as a surrogate mother to a Human child.