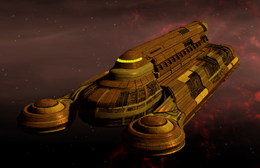 The Batlh-class Intel Science Vessel is a Tier 6 Science Vessel which may be flown by Klingon Defense Force characters, including Klingon Empire-aligned Romulan Republic and Dominion characters. All faction restrictions of this starship can be removed by having a level 65 KDF character or by purchasing the Cross Faction Flying unlock from the Zen Store. This starship can be used from any level upon completion of the tutorial experience. As you level up, this ship gains additional hull, weapon slots, and console slots.

. This ship can be purchased individually, or as part of the Cross Faction Intel Science Bundle [T6] for 6,000

The Batlh-class Intel Science Vessel fills an important role in the Klingon fleets. Gathering Intelligence and advancing Klingon Science is a vital component of ensuring that the Empire remains able to fight to the best of its ability as time goes on. It has powerful shielding to keep its crew safe, and a battle cloak to surprise foes seeking or protecting the same information.

As an Intelligence starship, the Batlh Intel Science Vessel is capable of deploying an Intel sensor drone with the Gather Intelligence ability.

The Batlh-class Intel Science Vessel has a battle cloak that allows the ship to cloak during combat, granting stealth and a damage bonus upon decloaking. It has a unique cloaking effect as seen on Star Trek: Discovery.

By using an [Experimental Ship Upgrade Token], the Batlh-class Intel Science Vessel may be upgraded to T6-X, unlocking an extra ship device slot, universal console slot, and the ability to slot an extra starship trait.

The following table compares various T6 Science Vessels that may be flown by KDF captains.