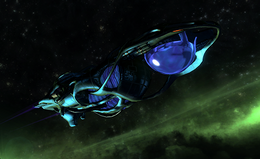 This page is for the playable starship. For the NPC vessel, see Benthan Guard Cruiser.

The Benthan Assault Cruiser is a Tier 6 Cruiser which may be flown by characters of any faction. This starship can be used from any level upon completion of the tutorial experience. As you level up, this ship gains additional hull, weapon slots, and console slots.

Players can obtain this starship as a ultra rare drop from the [Infinity Lock Box]; it comes in an [Infinity Prize Pack - T6 Ship] choice package, which is bound to you until a ship is chosen. It can also drop from the older [Delta Expedition Lock Box]. The boxed ship is not bound and so may be traded to other players or bought and sold on the Exchange for energy credits under the name [Special Requisition Pack - Benthan Assault Cruiser [T6]].

under the name Benthan Cruiser [T6] as part of "Mudd's Market", though it periodically goes on massive discounts (upwards of 60% during special promotional sales).

The starships of the Benthan Fleet combine efficiency and beauty in equal measure. The smooth flowing lines of their ships' outer hulls serve to both enhance its aesthetic appeal, and allow incoming energy to be redirected and distributed across its subsystems, increasing its survivability during any confrontation.

The Benthan Assault Cruiser is the most well-known of their vessels, serving as the vanguard in the majority of their peacekeeping operations.

The ship can also equip other console from the Law and Order Set, allowing the use of additional ability:

By using an [Experimental Ship Upgrade Token], the Benthan Assault Cruiser may be upgraded to T6-X, unlocking an extra ship device slot, universal console slot, and the ability to slot an extra starship trait.