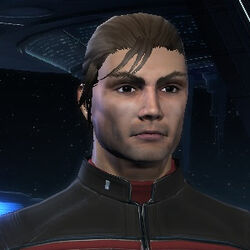 Betazed is a Federation planet and is home to a telepathic humanoid race known as Betazoids. Betazoids are a playable race in Star Trek Online, and belong to the Federation faction.

Betazoids are physically identical to Humans except for the iris of their eyes which are completely black and significant differences in the brain, including an entire additional lobe in the Betazoid brain compared to humans, which is responsible for their telepathy.

Betazoids have naturally strong telepathic abilities and are capable of sensing the emotion and thoughts of others with the exception of some races, such as Ferengi and Changelings. Some Betazoids do go above and below the typical abilities that most Betazoids possess. Some are able to directly manipulate other peoples' minds and some can barely read emotions of others. Due to their telepathic abilities, Betazoid society tends to revolve around openness and honesty. In Betazoid wedding ceremonies all participants are requested to be completely nude.