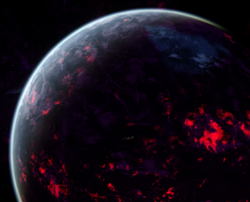 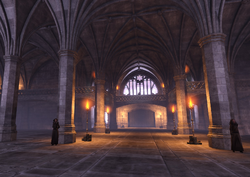 The entrance hall to the monastery

Boreth is a planet in the Boreth System of the Boreth Sector and site of a Klingon monastery, the only structure of the planet.

At the end of his rule in the 9th century, Emperor Kahless the Unforgettable pointed to a star in the sky over Qo'noS and told his followers to look for him on this point of light. The star turned out to be the sun of the Boreth system, and Klingon monks would later found a monastery on Boreth.

The monastery was built near natural lava caves, and also served to protect a rare mineral native to the planet: time crystals. In 2257, Section 31 aided the seclusion of a Klingon child on Boreth; the child of L'Rell and Voq. Due to the time crystals the child, Tenavik, aged differently and was encountered as an adult shortly after.

In 2369, Klingon monks on Boreth, who were unhappy with the moral and political situation in the Klingon Empire, cloned Kahless from DNA fragments extracted from the ancient Knife of Kirom. The clone of Kahless "appeared" to Lt. Cmdr. Worf while meditating on Boreth and subsequently claimed leadership of the Empire. Worf and Chancellor Gowron uncovered the monks scheme, but later agreed to install the clone as a representative and moral "Emperor" without real power.

By 2394, Alexander Rozhenko left Qo'noS for Boreth in order to undergo the Challenge of Spirit. Two years later and back on Earth, he was considering writing a book about his experiences on Boreth.