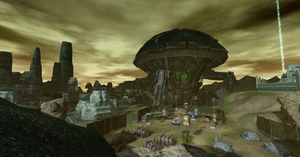 The Borg Invasion of Defera is a level-50 adventure zone in which Task Force Omega calls on ship captains to assist in their battle against the Borg Collective, which launched a massive attack on the planet Defera Prime to assimilate Preserver technology.

The Defera Invasion zone pits players against the Borg in different situations scattered throughout the planet's vast and varied landscape. There are four different areas of conflict on the map, each with its own range of difficulties. Missions vary in difficulty from solo play to requiring a 3 member team to succeed.

Captains Kuzmina and Wek explain the main goal in the Defera Battlezone after player's first arrival.

You're just in time! The Borg are overruning the planet, and the Deferi need our assistance.

There are command centers in this base camp to organize our offensive in each area currently being targeted by the Borg. We'll also need to deal with the Probe they've dropped right into the middle of this mess.

Talk to the personnel here. They will have assignments for you that will assist in our defense.

The Deferi are depending on us, <Rank>. We must do what we can to save them.

You're just in time! The Borg are overruning the planet, and the Deferi couldn't even deal with the Breen.

They won't last two days against the Collective unless we help. Fortunately for them, Chancellor J'mpok still sees a benefit in keeping the Deferi alive.

There are command centers in this base camp to organize our offensive in each area currently being targeted by the Borg. We'll also need to deal with the Probe they've dropped right into the middle of this mess.

Talk to the personnel here. They will have assignments for you that will assist in our defense.

The Borg do not deserve mercy, <Rank>. They are a cancer, and the only way to deal with a cancer is to destroy it utterly.

and have varying cooldowns based on difficulty. While the Bonus Marks Event is active, the amount of marks rewarded by these missions is increased. 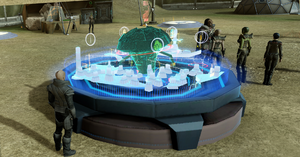 Holographic display of the battlezone at the Base Camp.

This is the staging area for pushing back the Borg. You will find transporters to the City, Temple, and the Power Plant here.

The urban center of this portion of Defera, the City is home to countless Deferi, many of whom did not have a chance to escape when the Borg invaded. Players will be asked to aid in the rescue of those Deferi trapped by the planet's newest residents before they are assimilated and the Borg add their knowledge of the Preservers to the Collective. 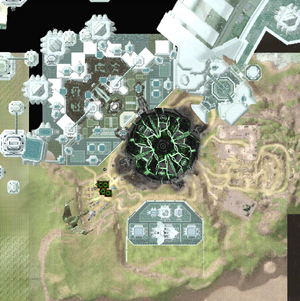 The Borg siege machinery – as well as the Borg invasion forces themselves – require a huge amount of power in order to wage their campaign. As a result, one of the first areas attacked, and subsequently taken over by the Borg, was a large hydroelectric power station. Players will be tasked with disrupting the Borg efforts to secure energy in the Power Plant and establishing a beach head for further attempts to take back this part of the world.

The Borg have come to Defera to assimilate the knowledge of an extremely powerful race called the Preservers. While the Preservers themselves are no longer on Defera, the planet is littered with their legacy in the form of ruins and artifacts, such as the remains of a Temple that is the target of this Borg invasion force. Players will lead the efforts to defend the Temple from a constant stream of Borg while trying to secure the knowledge of the Preservers for their own use against the invaders. 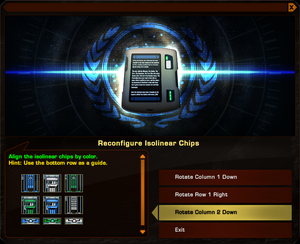 Get row 2 (consisting of the narrow part of the chips) in order: blue, green, white.

Towering over the Defera Invasion zone is the Borg Probe, a large device meant to quickly and efficiently disseminate the Borg nanovirus to assimilate the entire planet. Thanks to the quick response by Starfleet and the KDF, the nanovirus was contained and the Probe now serves as a base of operations for those Borg tasked with leading the invasion. Daring players can attempt to take on these Borg leaders. Combat throughout the Defera Invasion zone takes place at Rear Admiral/Brigadier General level. Characters who have not yet reached this rank will be bolstered to fight at the appropriate level (much like how the Borg Red Alerts work currently). In case the looming threat of the Borg gaining the knowledge of the Preservers wasn't enough to motivate you into helping the Deferi people, special items have been created for this area as world drops, mission rewards, and craftable items – all designed to aid in your fight against the Borg.

There is one mission:

The Defera Invasion zone can be accessed from either the Defera Visitors Center or Defera System in the Deferi Sector of the Orellius Sector Block. This area will always be available for players to visit.

Zone Wide missions have objectives which are either dispersed throughout the entire zone or which can be done in several locations. They reward the crafting materials unique to this area:

The missions all reward 10 of these items total, with a minimum of one each; the distribution appears to be random.

Missions given by each factions' Probe mission giver (Kuzmina/Wek):