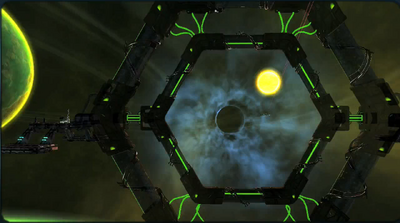 The Borg Transwarp Hub (also known as a Borg Gateway or simply Gateway) is a gateway system that allows Ships from the Borg Collective to travel beyond traditional warp speeds at near-infinite velocity. It was heavily utilized by the Borg in the Delta Quadrant and allowed the U.S.S. Voyager to return home. The hub allows forces from the Collective to enter the Alpha Quadrant as a means for an invasion route. The ideas, and designs of the Transwarp hub brought back by the U.S.S Voyager, was the inspiration that led to the creation of the Federation and Klingon Transwarp Conduit Networks.

In 2409, the Borg have erected several of these devices in the Beta Quadrant as part of their invasion. Unlike the Transwarp Hubs encountered by Voyager, these hubs are heavily armed and are formidable foes, comparable to most Dreadnought-class starships in terms of firepower and armor. In addition to the Borg ships emerging through them, they are also supported by nanite generators and transformers. These devices serve to regenerate any damage inflicted upon the Transwarp Hub, making it invincible until these support structures are destroyed.