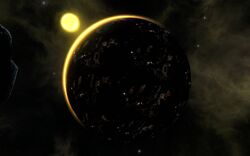 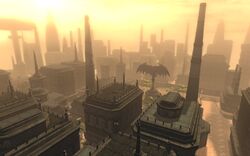 The surface of Brea III

Brea III is the third planet in the Brea System. It is home to a major Tal Shiar base in 2409.

The tropical world of Brea III was once a pleasure planet for the Romulan Star Empire. High-ranking military officers, senators and nobles flocked to its warm oceans and build palatial homes in secluded jungle estates. Scientists and archaeologists studied ruins of an ancient civilization scattered across the planet.

After the destruction of the homeworld, however, the estates fell into decay and the research projects were forgotten. Most of the population migrated to more populous worlds. Brea III was left to quietly decay, and the jungle has reclaimed much of what was once there.