This article refers to the Breen species. You may instead be looking for the planet Breen or the faction Breen Confederacy 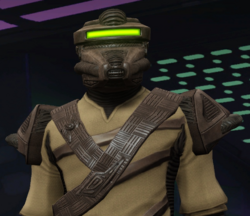 Breen are a non-playable race in Star Trek Online. Their home planet Breen in the Alpha Quadrant is the core world of the Breen Confederacy, their state. Despite their ongoing presence in interstellar affairs, the precise location of the planet remained unknown until some time ago. It's in the Breen System in the Breen Sector.

Although the Breen are believed to be humanoid, they have never been observed without their body armor. Thus, their physiology has never been studied. They have indicated that their clothing functions dually as armor and a refrigerator, causing many to speculate that their homeworld is intensely cold.