This article is for the playable starship. For the NPC vessel, see Rezreth Destroyer. 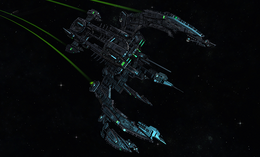 The Breen Rezreth-class Dreadnought Cruiser is a Tier 6 Dreadnought Cruiser which may be flown by characters of any faction. This starship can be used from any level upon completion of the tutorial experience. As you level up, this ship gains additional hull, weapon slots, and console slots.

Players can obtain this starship from the Phoenix Prize Pack, for 1 [Epic Prize Token - Phoenix Prize Pack]; this ship box cannot be sold or traded. Those who obtained it from a previous (2015) Q's Winter Wonderland event for 1000 Winter Prize Vouchers may reclaim it from the Event Store reclaim.

Breen Rezreth Dreadnought Cruiser, largest in the Breen Confederacy, is a massive behemoth of a starship that is as versatile as it is durable. However, due to its massive size, it is slow to maneuver. It is known for its power-siphoning tactics by increasing power levels at the expanse of the enemies.

The Breen Rezreth Dreadnought Cruiser comes equipped with one [Hangar - Bleth Choas Fighters]. These fighters are equipped with one fore Polaron Pulse Cannon and one fore Transphasic Torpedo Launcher and can use Evade Target Lock.

By using an [Experimental Ship Upgrade Token], the Breen Rezreth-class Dreadnought Cruiser may be upgraded to T6-X, unlocking an extra ship device slot, universal console slot, and the ability to slot an extra starship trait.