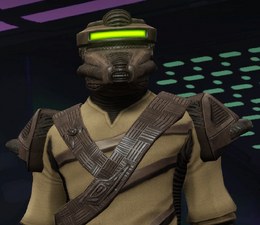 The male Breen Bridge Officer candidate (defected from the Breen Confederacy) is a Very Rare, unique reward, that was previously available as a reward for completing the last mission of the Breen Featured Episode Series, “Cold Storage”, during the Featured Episode Rerun.

He was added to the Zen Store as part of the It's About Time Pack for 8,000

in the Mudd's Market section.

He is a Tactical officer and depending on the player's faction a Starfleet Ensign or KDF Warrior.

Due to the Breen environmental suit and mask, this officer is not customizable like standard bridge officers. Players are not able to change body type, facial characteristics, or add custom uniforms to him.