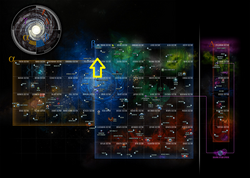 The Breshar System is a system located in the Ponor Sector of the Beta Quadrant. It is the site of Outpost Quebec Alpha.

Outpost Quebec Alpha is one of a handful of Federation bases established in the Ponor Sector in the early 2390s. The original use of Quebec Alpha was to provide support for Romulan colony worlds seeking independence, but over the past five years its focus has changed to defense and research. There is a team from the Vulcan Science Academy in residence on the station, and academy students frequently assist during planetary surveys of Beshar Prime.

The system consists of a blue giant star and two planets. There are two anomalies: Unknown Technological Data.