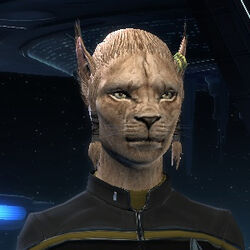 Caitians are a felinoid race with distinct cat-like features. As their homeworld, Cait, has been a Federation member as early as 2286, Caitians are known to serve both in Starfleet and on the Federation Council. They're known throughout their quadrant for their intelligence, curiosity, loyalty and love of beauty. Caitians' interlocking personal and clan relationships can create large family groups that sometimes number in the hundreds.

Caitians originally come from Ferasa. 800 years ago, a eugenics program aimed at creating Augments and involving Ferasan Nepeta Leaves as psychotropic triggers leads to a split of the civilization of Ferasa. While the augmented Ferasans prevail, the non-augmented Caitians retreat to a new homeworld outside Ferasan space. (Assignment chain: Caitian Diaspora)

Caitians are a playable race in Star Trek Online for the Federation faction, however they must be unlocked from the Zen Store for 600

. From May 3rd 2012, Caitians have been given several options for hair styles.

Caitians are bipedal, with height comparable to humans, have tails that assist their balance and large eyes with excellent night vision. Their skin is covered with soft fur coat, and their felinoid ears can pick up frequencies that most humanoids are unable to detect. Caitians are also remarkable jumpers; able to leap roughly twice as high as an average human.

The provided colors of fur players can select from for their Caitian character vary from reddish through golden and brown to black, and different shades of gray from almost white to black. Palette for eyes allows shades of golden, brown, green and blue eyes.

Caitians are related to the Ferasans, the other race of feline humanoids with more aggressive personalities due to genetic modification.

Players who purchase playable Ferasans also unlock new cosmetic options for any Federation Caitian character on their account. This includes the "Feline Hawk" hairstyle, which is shared with Ferasans, and 8 Overall Patterns, all 8 of which are unique to Caitians despite their unlock condition. Players with access to Caitians can preview these additional cosmetic options at a tailor before purchasing Ferasan.

The Caitians are currently the Federation race with the most playable ships of their unique design. The Atrox Carrier, Aspero Support Carrier, Shikaris Escort, and Stalker Stealth Fighter are all playable Caitian ships.