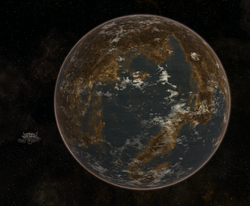 Cardassia Prime was heavily bombarded by its former allies at the end of the Dominion War, resulting in over eight hundred million deaths. Much of the work being done in Cardassian space since then has been dedicated to rebuilding their infrastructure and galactic influence. The Andak Project has been one of the attempts to terraform the planet's deserts into fertile farmland, intended to allow Cardassia Prime to support its population without needing to import resources.

The planet later became embroiled in the conflict with the resurgent True Way movement. Makkan, one of their terrorists who would later be imprisoned at Facility 4028, carried out a fatal bombing in an amusement center in Lakarian City. ( “Facility 4028”)