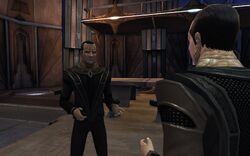 The Cardassian Union (also referred to as the Cardassian Empire or Cardassia) is the official governing body of the Cardassian people. The Union is a major political power in the Alpha Quadrant of the Milky Way and the current head of state is Natima Lang. After many years of reform, it now maintains strong ties with many other states although numerous Cardassians joined the True Way, which fights to bring Cardassia back to its old militaristic and imperialistic ways.

The Union was originally forged by the poverty of the Cardassian home world. Lack of resources forced the Cardassians to expand. This way, an aggresssive, militaristic colonial power emerged. After the devastation of the Dominion War the Union is reverting to a more liberal and civil society. The Union is ruled by the Detapa Council. Currently Natima Lang is the head of state. The new democratic Cardassia is challenged by the militaristic True Way rebellion.