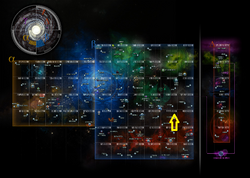 The Ceron System is a system located in the Mempa Sector of the Beta Quadrant.

A M-class world orbited by a M-class planetoid, the surface of Ceron is made up of a series of large islands surrounded by stormy seas. High levels of algae give the oceans a brown appearance, but the residents of the colony have learned to use the algae both as a foodstuff and fertilizer for their crops.