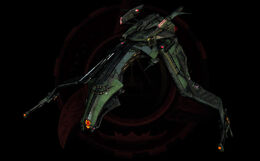 The Ch'Tang-class Bird-of-Prey is a Tier 4 (Level 30) Raider which may be flown by Klingon Defense Force characters, including Klingon Empire-aligned Romulan Republic and Dominion characters. All faction restrictions of this starship can be removed by having a level 65 KDF character or by purchasing the Cross Faction Flying unlock from the Zen Store.

under the name Ch'Tang Class. This ship was previously available on its own from the Zen Store; players that purchased it from there can still reclaim it from there on all their characters.

General Martok commanded the I.K.S. Ch'Tang during his raid on Trelka V in 2375, during which a small force destroyed a Dominion starbase. The Ch'Tang-class Bird-of-Prey honors that ship and its crew.

The Ch'Tang-class Bird-of-Prey has a battle cloak that allows the ship to cloak during combat, granting stealth and a damage bonus upon decloaking.