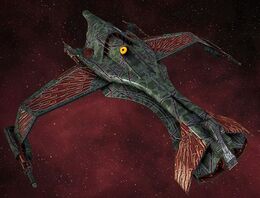 The Chargh'poH-class Temporal Destroyer is a Tier 6 Destroyer which may be flown by Klingon Defense Force characters and their allies, excluding Klingon Empire-aligned Romulan Republic characters. All faction restrictions of this starship can be removed by having a level 65 KDF character or by purchasing the Cross Faction Flying unlock from the Zen Store. This starship can be used from any level upon completion of the tutorial experience. As you level up, this ship gains additional hull, weapon slots, and console slots.

. The boxed ship is not bound and so may be traded to other players or bought and sold on the Exchange for energy credits under the name [Special Requisition Pack - Temporal Destroyer (T6)]. The choice box's contents depend on the player's faction; Klingon Empire players will receive the Chargh'poH Temporal Destroyer when opening it.

The Tholians have been up to their old tricks. Their obsession with time travel, the mirror universe, quantum realities and related technologies seems to motivate their every move. Even their ships' warp cores often tear holes in the fabric of the universe when they breach. In addition, newly unclassified evidence suggests the Tholians were responsible, or at least heavily involved, in the loss of the Constitution class U.S.S. Defiant in 2268.

Recently detected activity reveals several Tholian asteroids bases in or around the Azure Nebula. Several Federation and Klingon Starships have been detected at these bases, many of which demonstrate an unusual quantum or temporal signature. A few covert strike teams have been sent to this region. These teams have brought back a handful of amazing discoveries - - among them, 29th Century Starships!

The Chargh'poH-class Temporal Destroyer is one of these 29th century timeship, recovered from the Mirror Universe. As a successor to the Krenn class, Chargh'poH follows its steps with a tactical oriented setup and flexible seating options, with a few additions inherent to higher tier starships.

The Chargh'poH-class Temporal Destroyer comes with an Experimental Weapon slot. This additional slot does not fit standard weapons. Unlike standard starship weapons, Experimental weapons are not affected by weapon firing modes, such as those granted by bridge officer abilities.

Klingont starships come with standard equipment and weapons of the lowest mark available at the ship's minimum rank. The items provided are appropriate to the type of vessel and its related playing style.

By using an [Experimental Ship Upgrade Token], the Chargh'poH-class Temporal Destroyer may be upgraded to T6-X, unlocking an extra ship device slot, universal console slot, and the ability to slot an extra starship trait.