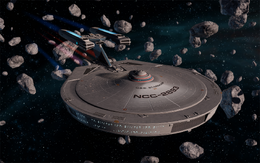 The Constellation-class Heavy Cruiser Refit is a Tier 3 (Level 20) Cruiser which may be flown by Starfleet characters, including Federation-aligned Romulan Republic and Dominion characters. All faction restrictions of this starship can be removed by having a level 65 KDF character or by purchasing the Cross Faction Flying unlock from the Zen Store.

. This ship can be purchased individually, or as part of the Captain Picard Bundle for 12,000

The recent Refit of Starfleet's Heavy Cruiser extends the life of one of the oldest ships in the fleet. This workhorse of the Federation has been used for the past 125 years for everything from deep space exploration, transport, blockade and patrol missions. These cruisers are much more capable than the Tier 2 Constitution-class Cruiser.

The Constellation-class Heavy Cruiser Refit comes equipped with a [Console - Universal - Warp Burst Capacitor]. This unique piece of equipment allows you to execute a short-duration high-warp burst that confuses enemy sensors into thinking there are two versions of your vessel for a short period of time. This quick burst of coherent warp travel facilitates a Federation tactic known colloquially as the "The Picard Maneuver." The Picard Maneuver grants you a few moments of untargetable status, and moves your ship a good distance forward along your current trajectory in an instant. It also offers you a noticeable tactical advantage. You will be granted a short duration ambush damage bonus immediately after the warp burst. This console can be equipped in any console slot, on any starship.